I returned from the recent #BTCC weekend from Oulton Park having watched a cracking Sunday of racing and nursing some tender skin from too much sun which I am probably not alone with.
My main concern however, is how (from a fan’s perspective) there seems to be strange things going on which, on face value at least, seem not quite right.

I have 2 gripes following the weekend.
1) Engine boost adjustments.
2) There seems to be a re-emergence of tapping whilst racing which has become tolerated.

I must iterate that I am speaking prom the fan viewpoint here. I have no doubt there are justifications for most of the issues, but ‘we’ as fans see very little of them which in turn fuels mis-information and witch hunts against teams / drivers etc. I am also an engineer are like to understand how and why things work.

So point 1 – boost. As FP1 neared, I heard an announcement over the circuit tannoy system that the Subaru BMR team had received a boost increase following a new manifold fitted to the engine this weekend.  As Saturday progressed it was clear that the Subaru team was flying which resulted in Colin Turkington on pole and Jason Plato not far behind. Obviously something had improved massively on the car compared to previous rounds. I had a few conversations with people associated with the teams and press which proved enlightening.
The Subaru engine had a new manifold developed for the weekend and, as a result, received a drop in boost. This was disputed (very loudly by the team and drivers) and was re-instated for qualifying. There was also a bulletin issued prior to the weekend saying that there may be further increases based on how Saturday had progressed. Obviously with 2 cars in the top 5 this was not going to happen!
Now my understanding regarding the manifold and initial drop, was that this was done after Thruxton so around 2 weeks prior to Oulton, however as a fan, I saw no press relating to it.
I also understand that TOCA privately review all data regarding engines which are independently tested and analsyed.  The results provide any adjustment of boost levels after regular, periodic time periods.
This makes perfect sense and maintains a level of equality from a power train point of view. Also, this data is very sensitive and should never be public.
Where I feel TOCA don’t do themselves any favours, is how and when this information is communicated to the public as this fuels much of the negative feelings towards teams and drivers.
I put my hand up to say I a have a small amount of information which can be mis-leading. But part of this is what is fed or mis-fed from TOCA / teams and drivers.
On face value, you could argue a large team with high profile drivers and large manufacturer backed support were keen to see their team and sponsors in the limelight.
I also think Dan Welsh would have loved the same degree of attention and public support in the 2 years he must have been pulling teeth out trying to develop an engine in a similar vain but I didn’t see it and wonder how level the playing field is.

Much in the same way I criticise management for some of the decisions they appear to make in my own work, I feel much of this could be solved with better communication of facts and reviews which, in turn produce changes and effect races / teams and ultimately championships. I also admit I may be barking mad and barking up the wrong tree, but this is my viewpoint which I feel am not alone with speaking to many over the weekend.

Now point 2 – Driving standards and associated punishments (if any)
I read late on Sunday evening after the racing had finished that several reprimands had dished out Oulton Reprimands
I watched the screen infield for race 1 and commented at the time that Jason Plato appeared to run into the Honda of Daniel Lloyd into the hairpin to gain the place, the post race result appearing to be a meager fine and 3 points, but no change to the result. Now if Lloyd braked early resulting in the contact then there is no fault to Jason, but where have the points and fine come from ? Was this a slap on the wrist and a telling off but we are happy to have you back on the podium ? It does look very lenient!
Then in race 2 there seemed to be a continuation of the feud between Josh Cook and Matt Neal as Cook appeared to have a rear bumper hanging off and Neal with front damage.
There have been more issues in the previous rounds and also last year which seemed lenient compared to previous years.
I am not a fan of the ‘bad old days’ in pre NGTC specifications where much of the driving was dirty and push to pass was allowed and you had to go a long way for a reprimand. There were several drivers who took full advantage of this with Messrs Plato and Neal top of the list. Thankfully, this was cracked down on and clean racing encouraged and enforced for a number of years.
Unfortunately, this seems to have lapsed slightly of recent and more importantly seems to have become inconsistent to boot!
Please Alan Gow / Toca / Technical Experts, lets tighten up the controls and raise the standards of driving for the series. This can only be good for the future of the series and teaching such cracking young drivers we currently have that clean racing reaps the rewards of hard work and that we are not looking for stock car drivers!

You may recall a previous blog I made a few years back about Craig (from hereon in Craig is now referred to as Craigo following the Fosters adverts which aired a while back and resulted in his name unofficially changing).
Well Craigo is now 7 and still has a love for motorsport and his Bentley race suit almost fits him now!
In the time since I last wrote, both my wife and myself had become members of the Rob Austin Racing Owners club following various Birthday presents to each other. From the membership of this group, I was fortunate to win a pair of tickets to Croft circuit which one of the members had donated (thanks Nadine

).
As raceday arrived, we made the journey from the Midlands up the A1 arriving at the circuit just at race one was underway. Keen to offer thanks for the tickets I sought out the RAROC members who were quickly spotted on the outside of the Hawthorn Bend and we were soon welcomed into the group.

It soon became apparent that the group were friendly, helpful and erm… how do I say this politely… a touch mad !
Craigo was happily sat with his new friends who were talking and playing. Obviously, with boys this usually escalates which is where the following picture emerges.

I am not quite sure what exactly started this, however I have a suspicion it may have followed Craigo telling his new friends his favorite driver was still Matt Neal which is something of a taboo for RAR fans! Needless to say, Craigo was bonding well with his new friends and spent the whole day sitting, playing and occasionally playing rough as boys do (I do apologise as Craigo was a touch over exuberant at times).

With is being raceday, Craigo was again on the hunt for more pictures and signatures for his suit, with particular focus on Andy Priaulx and Josh Cook. A short walk to the back of the garages resulted in the following pictures.

Craigo was once again over the moon, which as a parent you cannot underestimate just how much can matter.
I would like to thank the people who made all this happen and continue to make the BTCC special for adults and kids.
Josh Cook who was busy when I asked but still was prepared to spare the time to pose for a picture prior to the start of race 2.
To Andy and specifically his wife Jo Priaulx (I didn’t realise you were his wife until afterwards) who spoke to Craigo so nicely and helpfully. 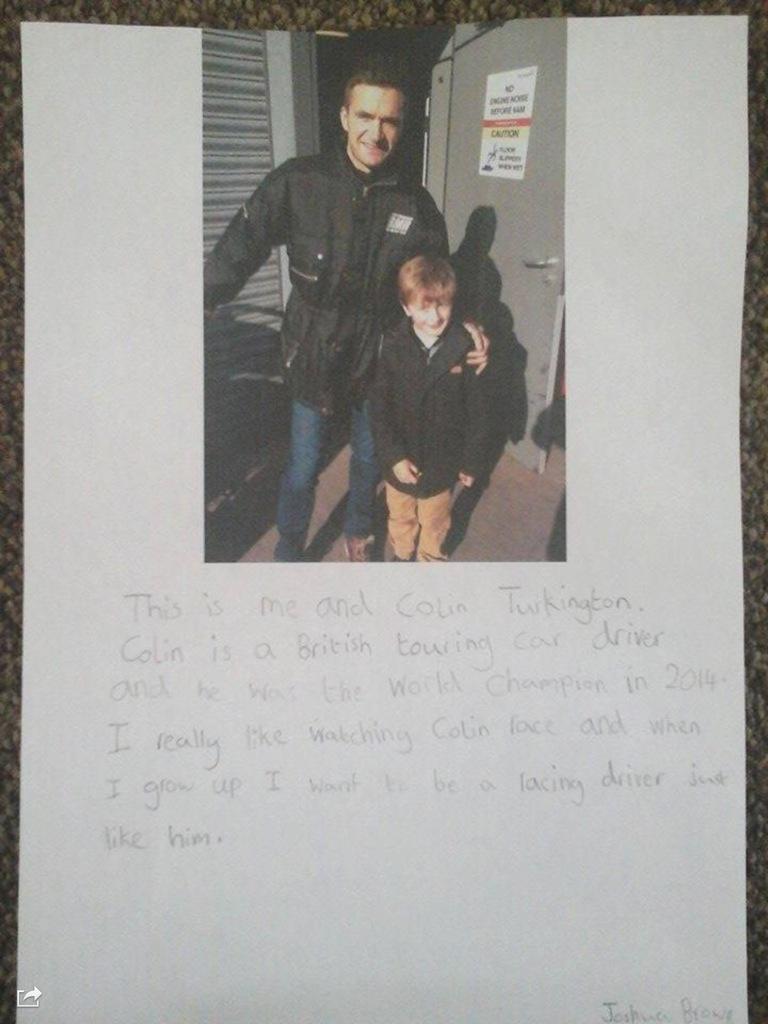 As a parent I understand and appreciate fully the time the drivers and teams take for the fans!

I was invited to a friend of mine’s trackday he had booked at Bedford Autodrome for the evening session on Tuesday 19th Aug 2014 as we had previously done something similar in my car a year or so ago.
Weather was good and I took along my camera to snap some of the machinery there. Had something of a mixed bag, mainly concentrating around the slight right-hander along the pit straight.
I was sticking to what I know best – panning shots.
Using the Canon EOS 1100D and stalwart Sigma 70-300 APO I tried various shots with mixed results.
Annoyingly, I found the sun was pretty much directly in line with the apex of the corner, hence some of the iffy shots.
As i finished moved slightly after the apex, turned the ISO mode from auto (which it always seems to default to ISO100) to ISO 400 and played to a shutter speed around 1/125 in Shutter priority mode with a single focus point in the centre. This gave an aperture of f/8, which wasn’t ideal for my lens and went against the grain of what I was taught to try and do (aperture of around 5.6 to match lens) – the results were fantastic though – with the pic of the green Exige S and Sunflower 172 some of my best shots.